When it comes to heavy metal music, Metallica is a household name — and rightfully so. As a hardcore fan, you’ve likely spent a decent amount of time listening to their iconic music on the loudest bearable volume. It’s a right of passage no matter how old you are.

We all know the group for the musical geniuses they are, but how much more do we truly know about them? Join us as we discover some interesting Metallica facts that you may not know.

We’ll also look at some of the branded Metallica T-shirt designs and the meaning behind them. Let’s find the one to get you ready for your next mosh pit.

The Making of Legends

It All Started With A Newspaper Advert

Looking at Metallica’s monumental success, you wouldn’t think they came together because of a newspaper advert. The band’s drummer, Lars Ulrich, started off looking for a couple of jam sessions and ended up gathering a legendary group.

Developing a New Genre of Music

What started as a group of teens sharing their mutual love of heavy metal became the beginning of the thrash-metal genre we know today. Along with Slayer, Anthrax, and Megadeth, Metallica is one of the pillars of the genre.

As with many other bands, Metallica has seen a few faces come and go over the years. There have been eight band members, with only three (Lars Ulrich, James Hetfield, and Kirk Hammett) standing the test of time.

The band’s second album was known for its memorable blue cover art. However, a printing mistake in France led to a number of covers printed in green instead. Today, those 400 mistaken copies are valuable collectors’ items.

While almost every band has a specific logo that stands out to the fans, Metallica’s brings mixed feelings. Some think it’s a terrible design, while others have joined the brand tattoo trend.

James Hetfield, the band’s lead singer, designed the Metallica and famous “ninja star” logos as well as the “scary guy”.

As with the name, the “scary guy” logo is a popular choice in Metallica T-shirt and tattoo designs. In fact, you could also find it as an infant wear variation for the younger headbangers.

A spelling mistake on the first album that Metallica appeared on — The Call Of Ktulu instead of The Call of Cthulhu — clearly didn’t slow them down one bit. In fact, over the decades, the thrash-metal legends have grown from strength to strength.

Metallica claimed their spot in the Guinness World Records of 2015 for being the first musical act to have performed on every continent. The pioneering group hit this momentous milestone in December 2013 with their performance in Antarctica.

For more than three decades in the industry, Metallica has gained extensive recognition for its mark in the music industry. Overall, the band has won 28 awards broken up as:

To date, Metallica’s record sales are sitting on a mind-blowing 125 million worldwide. The most successful one being “Metallica” (aka the Black Album), selling more than 22 million copies worldwide.

With all the Metallica memorabilia floating around, you’re sure to come across a fantastic T- shirt design that reflects your style. The best part is that most designs have a little history attached,

Whether you’re on your way to a party or a show, a concert or vintage Tshirt from Band-Tees is the perfect addition to your wardrobe. Match it with your favorite pair of jeans, and you’re good to go.

Here are a few designs worth paying attention to.

Kill ‘Em All for One

During the Summer of 1983, Metallica completed what they dubbed “The Fastest Show on Earth”. This marked the band’s first major tour, performing 31 shows cross-country over six weeks.
The T-shirt from this tour features the Kill ‘Em All album cover on the front and the tour dates listed on the back.

The Master of Puppets printed Metallica T-shirt celebrates the band’s third LP and its immense success as their first gold album. This shirt shows the aforementioned album cover on the front and the tour datest printed at the back.

So what is the significance of the T-shirt print design? According to Lars Ulrich, “the image encapsulates the idea of people, whether they are soldiers (“Disposable Heroes”) or drug addicts (the title track), being subconsciously manipulated — an overall theme of the record.”

One of the biggest misconceptions about fans of heavy metal and rock music is that it’s only for the depressed and lost. In fact, it’s the complete opposite. “Loud music” (as many refer to it) is actually the ideal outlet for suppressed emotions and harmful mindsets.

That’s the message that comes across in “Through the Never”. The concert film delivers the underlying statement that you have a purpose no matter what your challenges are.

Throughout the film, we see the main character rushing through a gauntlet of challenges to complete his mission. We also see the band facing obstacles during their performance. Yet, nothing hinders either of them from achieving what they set out to do.

This Metallica T-shirt, though missing an elaborate design, carries a message that really packs a punch.

If this is a reminder that you or someone you know needs, this is undoubtedly a T-shirt worth purchasing.

There you have it, some interesting facts about Metallica that’ll have you armed for your next trivia night. Which is your favorite album? Have you been to one of their memorable concerts?

Why not wear your die-hard fan status proudly with a Metallica T-shirt from Band-Tees? You’ll find a wide variety of shirt styles, wallets, bags, and other accessories branded for the ultimate metal legends. 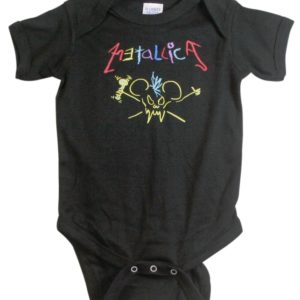 Metallica See Through The Never Mens White T-shirt
From: $27.00